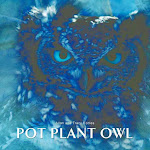 As you can imagine, we are still thrilled about the decision to not allow a development in the wetland. This morning I did a talk on "Pot Plant Owl". The best news I could tell the audience was the latest news about the wetland.

We're exhibiting at the Bryanston Organic Market this Thursday 30th June and Saturday 2nd July. If anyone is interested in getting information about protecting our natural heritage, please visit our stand.

Pappa and Pot Plant Owl visited us in the early hours of this morning. They spent quite a while hooting softly (for them) on the balcony. It was lovely hearing them again.
Posted by Pot Plant Owl at 4:25 AM 2 comments:

Today marks an historic occasion. We've just heard that the application for development on the wetland that we've worked hard to protect, has been turned down by the Government (Gauteng) authorities.

We didn't have the money to hire top-notch lawyers to pour over Acts, and make a case. We had to do this ourselves. From our many hours of reading and studying, we have compiled documents for people who are in a similar situation - trying to do their best to protect our natural environment.

We are not against development in general. That is why we have never criticised the developer in question about other developments he has less than a kilometre away from the wetland site. We are in favour of keeping sensitive natural sites such as wetlands, protected granite ridges etc in their natural state.

The documents that will assist you in protecting other sensitive areas from development will be made available soon on a new website I am launching. Full details to follow.

Again, thank you to everyone.

The developer may well appeal the decision, and we will monitor and update you accordingly. For now, we are happy with the decision that has been reached by the authorities.

And lastly, a thanks to Pot Plant Owl. For if she never decided to lay her eggs in our pot plant, we may have been oblivious to the impact a proposed development would have on their hunting ground.

With peace and love
Posted by Pot Plant Owl at 3:06 AM 11 comments: 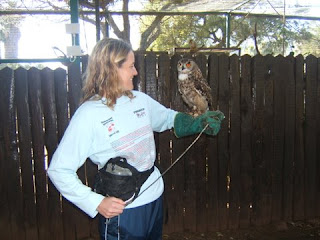 Posted by Pot Plant Owl at 3:04 AM No comments:

26 June and there's much excitement mounting... 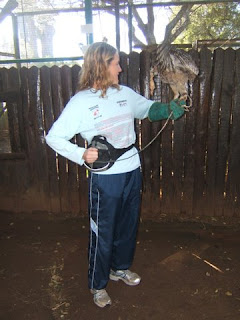 I know, I know. It's been far too long since my last post. To be honest, it's not my fault. Rather, the blame lies on Pot Plant Owl and Pappa for giving me nothing newsworthy to report here. A few visits during the week, but most often in the early hours of the morning when I'm half awake and not inclined to get out of my snug bed to say hello. Hopefully they get my telepathic messages...

Still, while I berate PPO and Pappa, it's actually easy for me to continue with my blog about all things close to me heart. And this is what I plan on doing to 'fill the gaps' while our owls decide their next move.

A couple of weeks ago, I had the privilege of holding Cody,a Spotted Eagle Owl in the Sun City Bird Park. Cody is captive-bred and forms part of the educational display and show there.

I spent a while talking to the manager, Dylan, and eventually convinced him that I wasn't a nutter that would do harm to Cody. Eventually, after much begging and pleading, Dylan agreed to let me hold one of the owls.

The following morning, I was up before the sparrows getting ready for the big moment. I say in all honesty that it was a big moment for me. Although I have had to handle a chick briefly before, I've never held an adult. If I tried to hold my arm out for Pappa or Pot Plant Owl to land on, I think they'd attack me for no other reason than I was being silly. Owls don't just land on people at will - easpecially not wild owls.

Just before the Bird Show, I was taken to the back enclosures, gloved up and given food in a waist pouch, to feed Cody. Cody's handler took Cody and gave Cody the command to step onto my arm.

The moment Cody stepped onto my arm, wings flapping close to my face as he gripped harder, I was in Heaven. The feeling of having Cody - a fully grown adult male Spotty - sitting on my arm, staring straight at me, was magnificent! Our faces inches apart, so close we could make out each other's 'markings' perfectly.

Feeding Cody requires a quick, firm hand, and I'm afraid I haven't mastered that - yet. As soon as Cody saw my other hand reaching into the pouch for a dead chicken, he lunged forward and tried grabbing my hand. The handler feared my reaction and took over the feeding. I didn't mind because it gave me more time to watch Cody grab the food and swallow the chick whole.

I must have spent a full 10 minutes on my own with Cody before our time was up. And it will be an experience that I will never forget. Thank you so much again, Dylan! You will never know what it means to share my life with owls, as we do here in our home, and never be that close to them to be able to hold them - once. It was indeed such an honour!
Posted by Pot Plant Owl at 2:23 AM 1 comment: